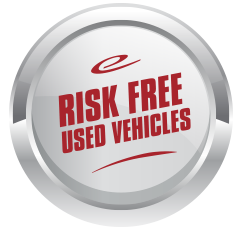 
This vehicle qualifies for our exclusive "RISK FREE" guarantee. This includes:

We have been in business since 1974 and are locally owned and operated. At Eide Chrysler Zumbrota, we believe in giving you a fair and competitive price upfront. All of our vehicles feature our Markdown Pricing to ensure you feel confident about getting a good deal and excellent overall value in your vehicle purchase. We would also love to have your trade! We will give you Fair Market Trade Value for your vehicle. Want to know what your trade is worth? Use the KBB Instant Cash Offer feature on our website to receive a guaranteed value for your vehicle! We also offer convenient service hours during the week and all day Saturday. We are very serious about your satisfaction and our aim is to make your experience with us Simple, Fast & Fun.

Reviews:
* Many strong engine choices, including the gonzo 707-hp Hellcat V8; roomy cabin can actually accommodate four adults; high degree of customization thanks to many trim levels and options; ride is pretty comfortable compared to its muscle-car rivals Source: Edmunds

Model Overview
The 2017 Dodge Challenger is offered in 6 main trim levels: SXT, R/T, R/T Scat Pack, SRT 392, SRT Hellcat and GT. Most trims have several sub-trims that represent different luxury and performance upgrades. Like the pony cars of old, the Challenger offers something for everyone, with offerings ranging from sporty and economical to full-blown muscle car and, in the case of the Hellcat, something very intense.
SXT and SXT Plus models come with a 305-horsepower 3.6L V6 engine, which is capable of an EPA-estimated 30 mpg on the highway. The Challenger R/T draws its power from a 5.7L Hemi V8, which makes 375 horsepower and 410 pound-feet of torque. The new R/T Scat Pack features a 6.4L Hemi V8 with 485 horsepower and 475 pound-feet, while still returning up to 25 mpg on the highway. The SRT 392 utilizes that same engine, while the top-of-the-heap Challenger SRT Hellcat has a new 6.2L supercharged Hemi V8. The monstrous engine makes 707 horsepower and 650 pound-feet of torque -- the most powerful muscle car engine ever produced. All Challengers feature a standard 8-speed "TorqueFlite" automatic transmission, though a TREMEC 6-speed manual is available in all the V8 cars.

Challenger SXT models have the same retro muscle-car silhouette as the others, but they're a little bit more sensible, with a low base price and reasonable fuel economy on the highway, while still providing satisfying acceleration for most everyday driving. The V8 models, however, have a different attitude, with a rumbling exhaust sound, tremendous torque just off idle, and a true muscle-car feel. Thanks to Dodge's multi-displacement system, which shuts down some of the cylinders during coasting or cruising to save fuel, all Hemi engines have the power to lay rubber but can also behave themselves when cruising.

Seating rests rather low in the Challenger, and the car's tall shoulders lend a protective feeling. The redesigned front seats have plenty of space for the largest folks, and although technically the Challenger is a 5-person coupe, its back seat can be quite tight, and entry and exit from the back seats can be a challenge. The trunk, however, is huge and easily accessed; Dodge says it's as big as that of the Charger sedan.

The high-performance SRT models at the top of the Challenger range are truly where the muscle-car cues all come together. They include HID headlamps, power heated mirrors, a remote start system, heated leather seats, a media center with hard-drive system and Boston Acoustics sound. Exterior cues include hood stripes, a rear spoiler, a functional hood scoop, a satin chrome grille and special SRT 20-inch alloy wheels. The appearance extras make the most of the blunt, aggressive shape and low, wide stance.

Standard features across the Challenger model line include electronic stability control, anti-lock brakes, side airbags and side-curtain airbags. The base Challenger SXT isn't luxurious but it includes nearly all the features that are expected at its price level, including keyless entry, cruise control, air conditioning, power foldaway mirrors and a CD/MP3 sound system with auxiliary input. In addition to the V8, suspension, steering, and wheel upgrades, the R/T adds fog lamps, satellite radio, Bluetooth and a spoiler, while the R/T Scat Pack also includes premium cloth sport seats, Brembo 6-piston brakes and a Bilstein high-performance suspension.

New for 2017 are the T/A and T/A 392 sub-trims, which modify the R/T and Scat Pack, respectively. They include many upgrades from the Shaker variants, along with styling elements from the Hellcat, including the unique air intake that masquerades as a headlight.